It may not come to mind when you’re looking for an easy family meal to prepare, but this Quick Spinach Quiche Recipe is so fast to make and delicious to eat!

I’ve lost track of how many people I’ve converted over to Team Quiche, especially those who say they hate spinach. There is something magical that happens with the egg and the spinach that just makes the whole thing work. I find that a lot of people when trying quiche for the first time, end up with a runny, soggy mess that is honestly very unappealing. Yuck! I don’t blame them for not liking it. But my Quick Spinach Quiche Recipe is nothing like that at all–it’s firm, flaky, and oh so savory.

See, back in my early days of learning to cook, I really wanted to recreate the yummy spinach quiches I used to eat at Le Madeleine restaurants. But every recipe I tried produced those runny, disgusting quiches, and I tried sooo many recipes. I finally just decided to analyze what was causing it and experiment. I found that most of the recipes called for too many eggs, too much milk, and the wrong kind of milk, all producing soggy spinach, eggs, and crusts. I really hope you give my recipe a spin, especially if you’ve never been happy with quiche before, and let me know what you think! 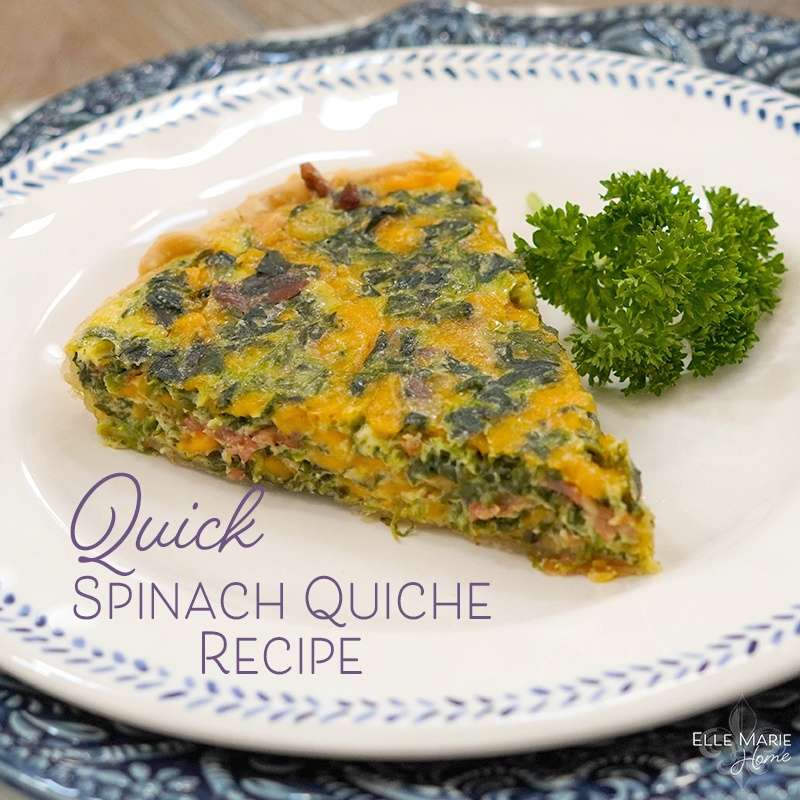 You can also go straight to a printable recipe card: 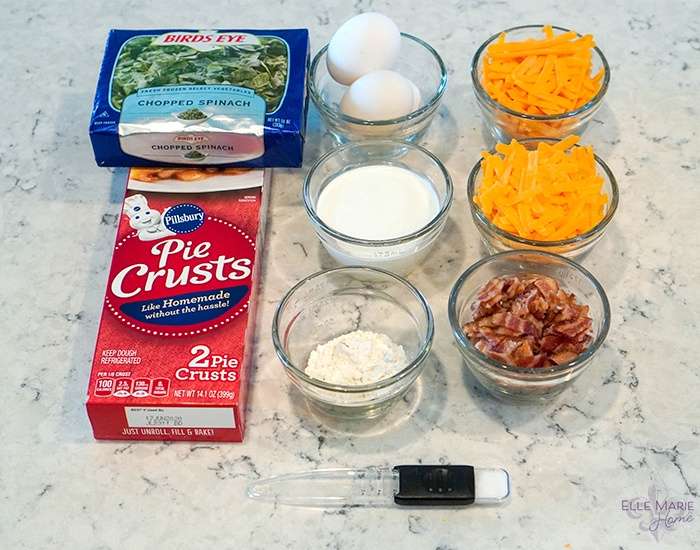 3: In one mixing bowl, whisk together the three eggs, one-half cup half ‘n’ half, and one-half teaspoon of salt with the fork. 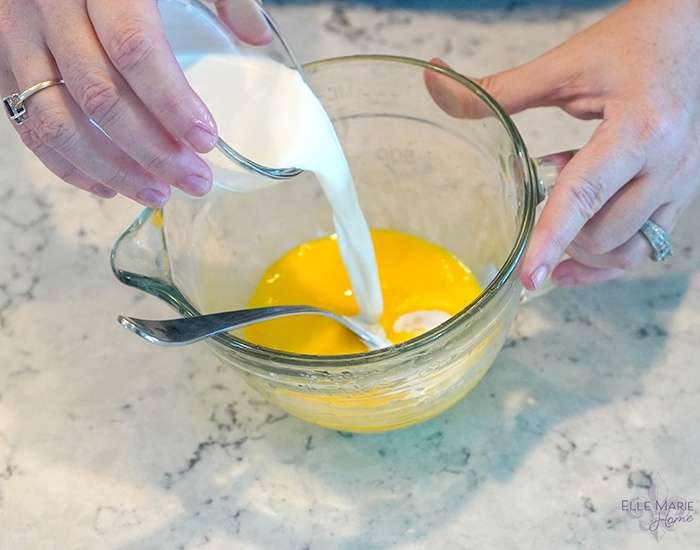 4: In the other mixing bowl, toss together the two cups of cheese and one tablespoon of flour. 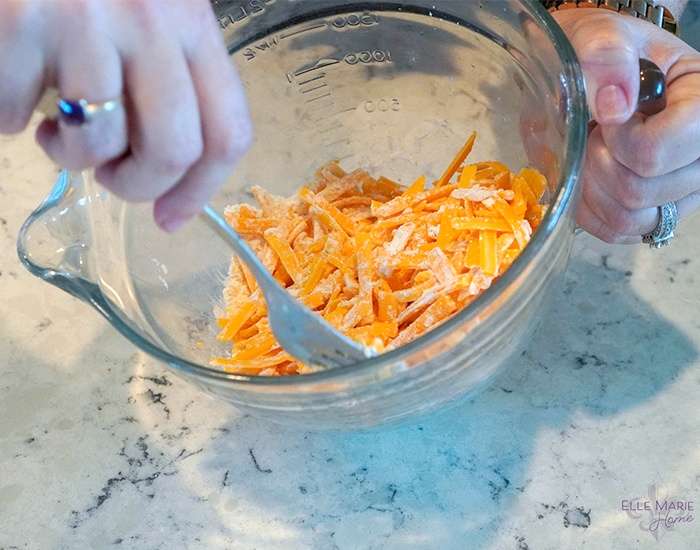 5: Combine the egg mixture into the cheese mixture, making sure to not leave any clumps of cheese without egg on it. I use a fork to do all of this because it works better with these ingredients than either a whisk or a spoon.

6: Strain the water out of the warmed spinach as much as possible. I use one of those fine mesh metal strainers and a soup spoon to press it so bits of spinach don’t fall through. Remember, we don’t want any extra liquid but we want to keep all of our spinach. Add the spinach to the mixture, and stir until it is completely combined. You may need to loosen or break up the clump of spinach that got compressed when you strained the water out of it. 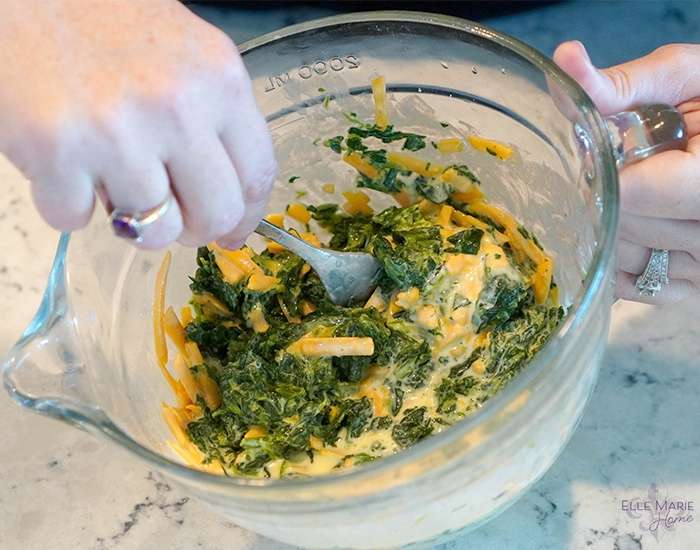 7: Now stir in the bacon and set that bowl aside. 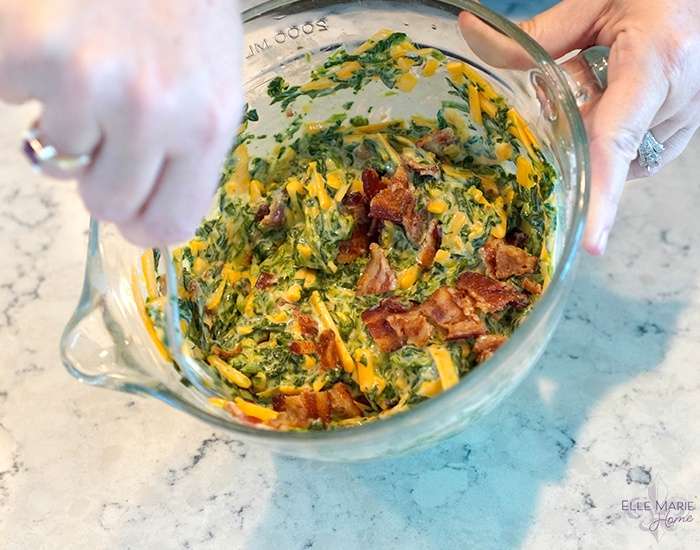 8: Take your pie crust and spread it evenly over your tart pan. If you have a tool to press the edges into the sides of the pan, use it, but if not, just use your fingers. Make sure there are no air bubbles. There’s no need to puncture the pie crust unless you plan to pre-bake it.

Note: I’ve tried prebaking the crust for about 10 minutes before adding the quiche mixture and I’ve made it without the pre-bake and the results are very similar. Pre-baking the crust makes it just slightly crunchier. Remember to use pie weights if you decide to pre-bake! 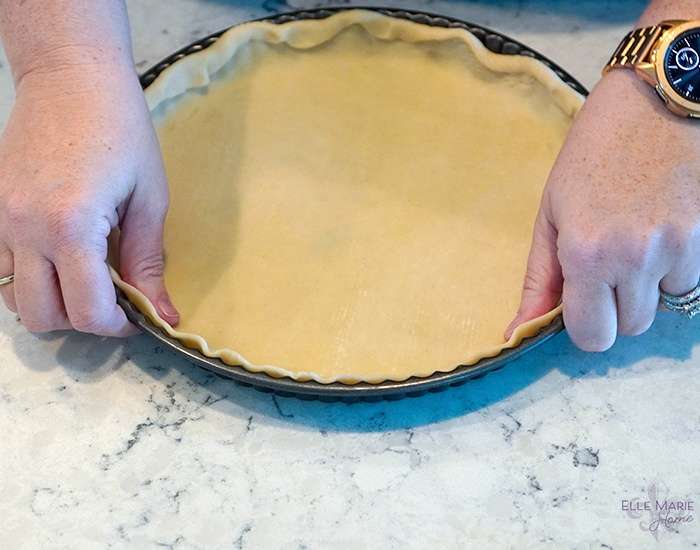 9: Scrape the quiche mixture into the crust and smooth it out evenly with the fork. 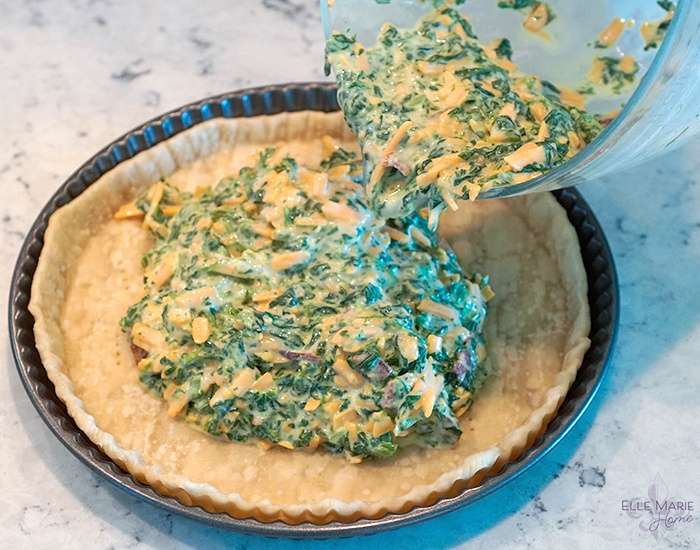 10: Bake the quiche for 30 minutes or until firm. You can test it by poking a toothpick or fork in it like you would a cake. 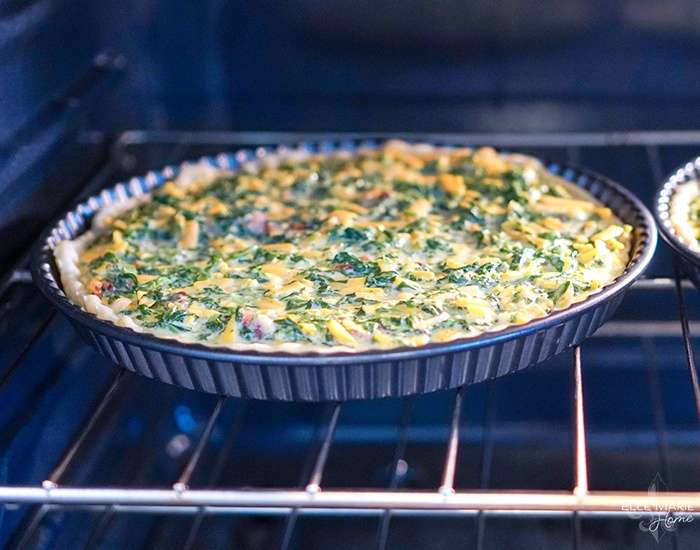 Let the quiche cool for at least 10 minutes for the best results when slicing. This quiche can be served hot, warm, or cold! Store sealed in your refrigerator for no more than five days. Microwave for no more than 30 seconds to reheat. 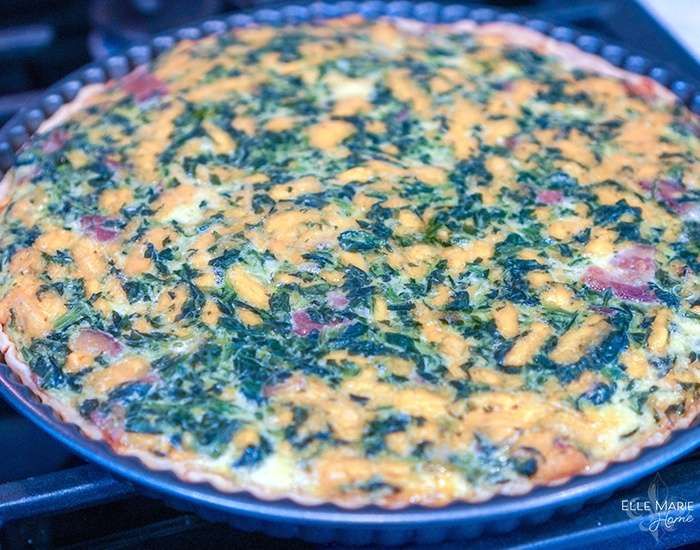 If you don’t have a tart pan, that’s okay, you can make my Quick Spinach Quiche Recipe in a pie dish just as easily, you just need to make a couple of adjustments. Instead of bringing the crust up and over the edges of the pie pan and crimping them like you normally would for pie, instead fold the edges over and pinch them to make a straight edge all the way around. When you add the quiche ingredients, they should come up pretty close to the top edge of the pie crust. Quiche baked in a pie pan will have to bake for an hour (because it’s much thicker than a tart) and any crust that exposed for that long may get overbaked. Nobody likes burnt pie crust!

If you’re still not convinced to jump on the spinach train, you can substitute the spinach and bacon for broccoli and ham if you prefer those ingredients. I’ve tried several different combinations myself, spinach is just my favorite. And for those who are always crunched for time and want to be able to prep this even quicker, there are shortcuts!

To save time (and honestly not much in quality) you can just use pre-shredded cheddar cheese and precooked bacon crumbles. I’ve made it both ways and no one could tell. Shh…I’ve also taken the longer, more expensive, all organic route aaaand it tastes the same. One extra note, because I care about you, don’t use fresh spinach unless you can really get those pieces chopped up very, very well. Even still, the spinach consistency is just off. It doesn’t make the quiche taste “fresher” at all. The Birdseye frozen chopped spinach is the only way to go, the ones in the little silver boxes. Green Giant is my second choice, but still a good one.

However you choose to make it, this Quick Spinach Quiche Recipe is sure to please the stomach!

If you’re looking for more fast and simple recipes you can make during a busy week, be sure to try my Easy Enchilada Recipe!

And if you’d love to make this quiche recipe in a smaller, bite-sized version, perfect for parties and gatherings, try out The Best Mini Quiches You’ve Ever Tasted! 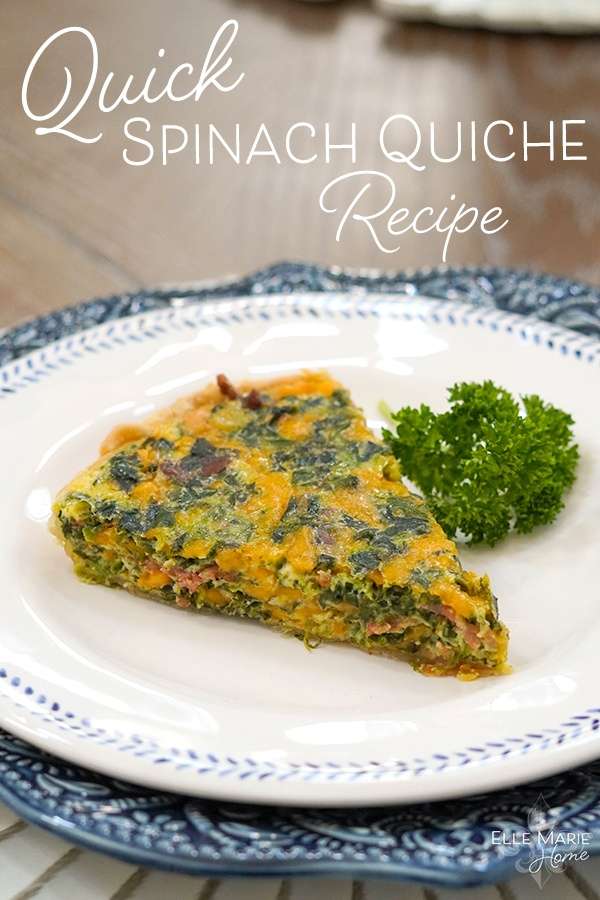