Have you tried making your own pom poms before? I’d never actually tried until I made that Santa Hat Crochet Blanket a couple of years ago and I wasn’t happy with the fork technique at all. I ended up buying a couple of different pom pom maker tools and have had much more success with making consistently sized pom poms. For this Pom Pom Monogram Letter project, I’m using those tools to make a bunch of them for a fun look. It’s also part of the monthly Inspire My Creativity blog hop and this month our inspiration is “blue.” This worked perfectly since I’m making 10 different monogram letters in red, blue, and yellow for my Wonder Woman Craft Room like this Chalk Painted Monogram Letter. Let’s see how it turned out! 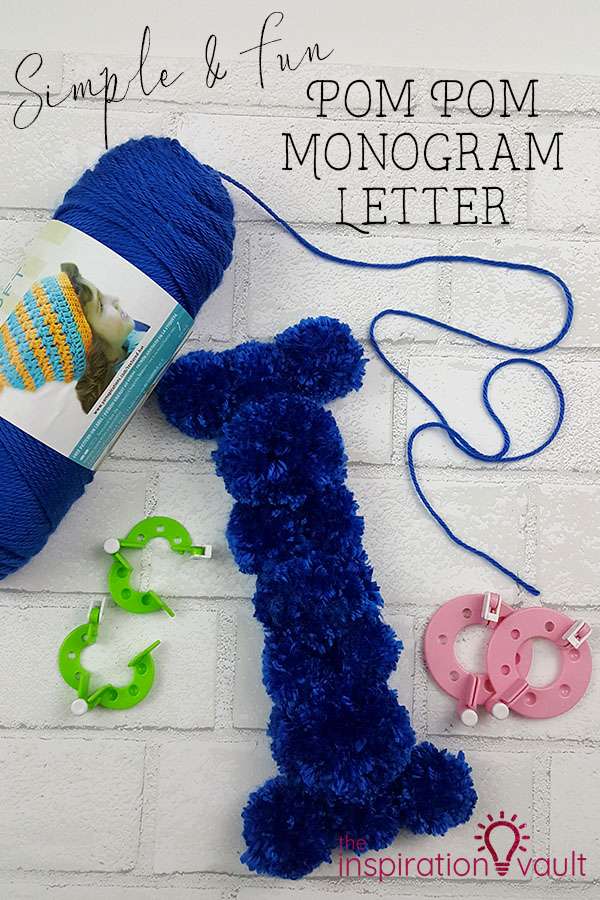 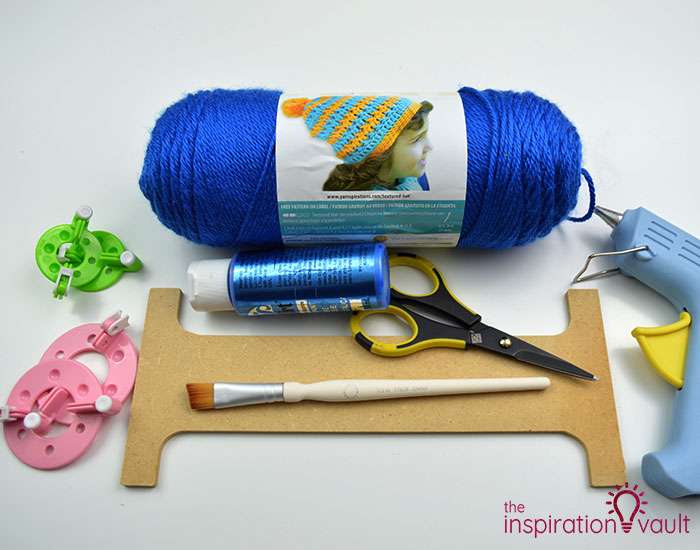 1: Paint your monogram letter in a coordinating color to your yarn choice. Let it dry completely. 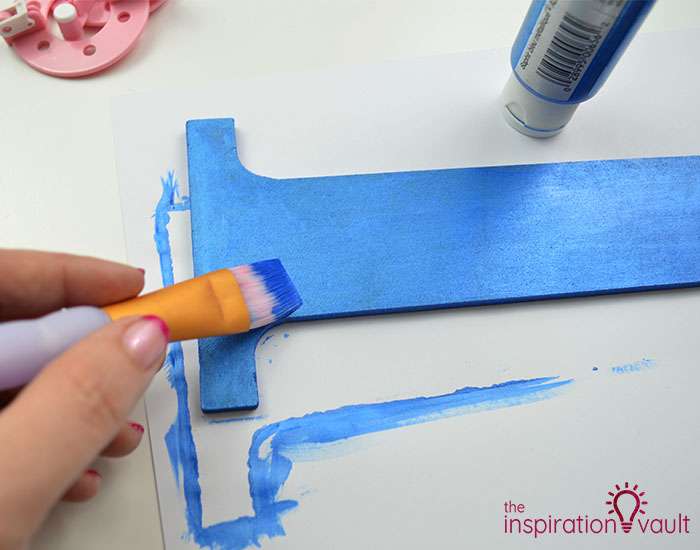 2: While that is drying, start making your pom poms. I’m using the pom pom maker tools by Yansanido and they’re my favorites, but you can also make pom poms using a fork or a cardboard template you can make yourself. I love these tools though because they are so easy to use and produce consistently round and pretty pom poms. I also have the pom pom tassel maker kit from Boye, but I don’t care for it as much because the poms come out more ovalish and require a bigtime haircut. I’ve discovered that kids find these easier to use than the ones I like, though. 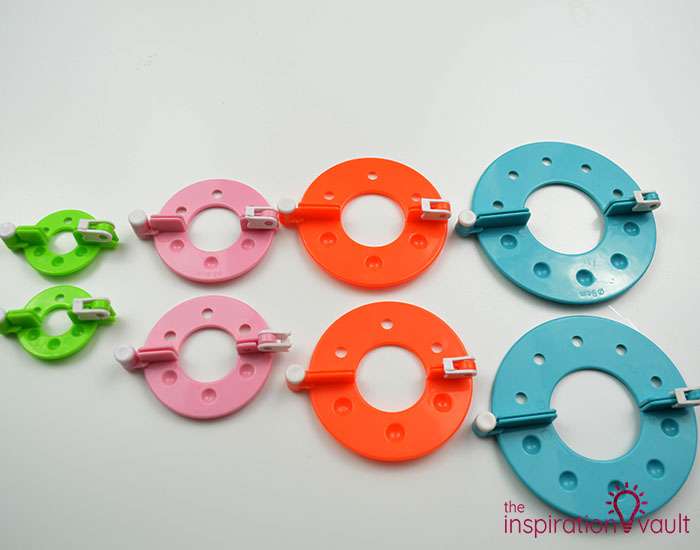 3: You start by leaving a small tail of yarn, then you wrap the yarn around the curve over and over again until the yarn fills up the curved space on one side as shown. 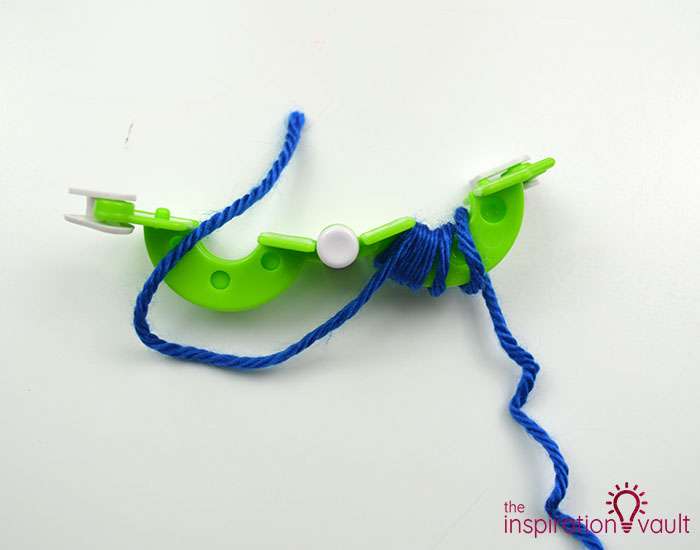 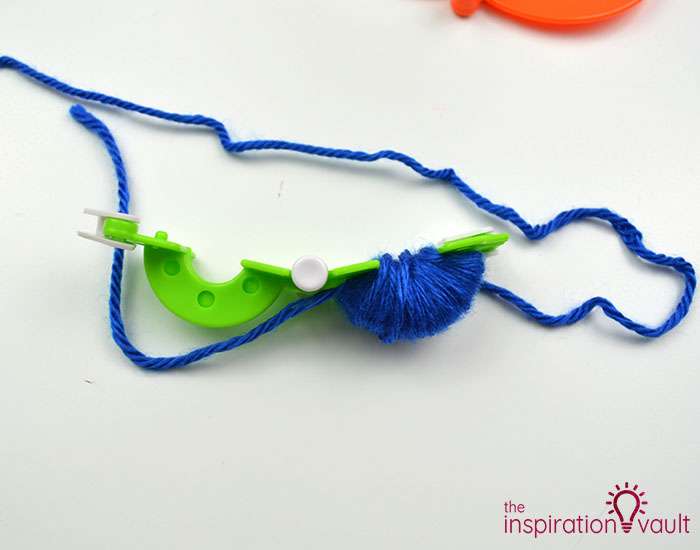 4: Then you continue wrapping over to the other side and fill that one up, too. 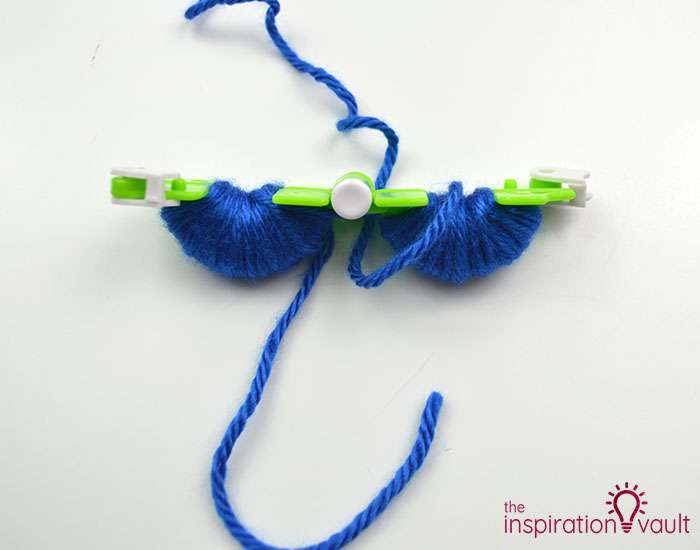 5: Next you close the two halves together and snap the little locks. You’ll need very sharp scissors to cut through all of the layers of yarn on both sides as shown. A sharp blade would work well, too. 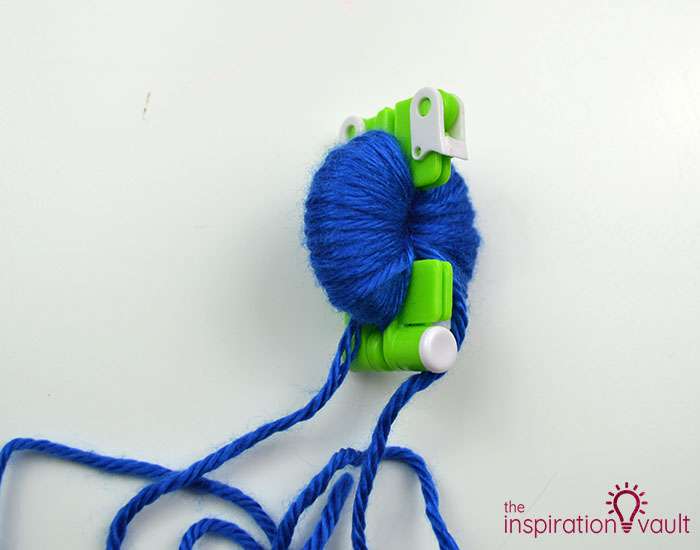 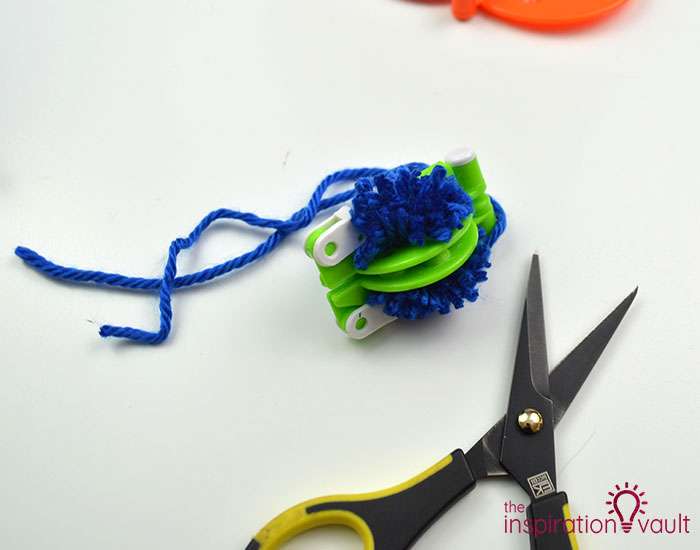 6: Once all of the yarn is cut, cut off about a six-inch length of yarn. Wrap it around the plastic tools, between the two halves, in those little grooves. You should hear it snap or pop as the yarn is pulled tighter. Pull the string tight and tie it into a couple of square knots. 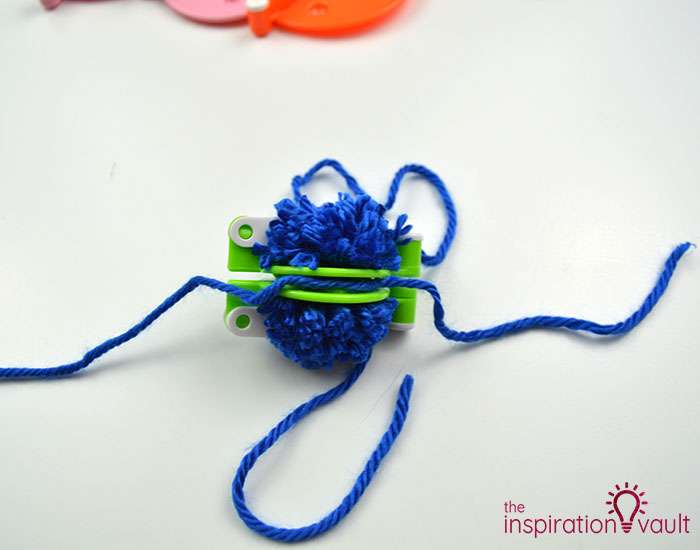 7: Pull apart the tools and fluff your pom poms. Trim off any uneven yarn pieces. 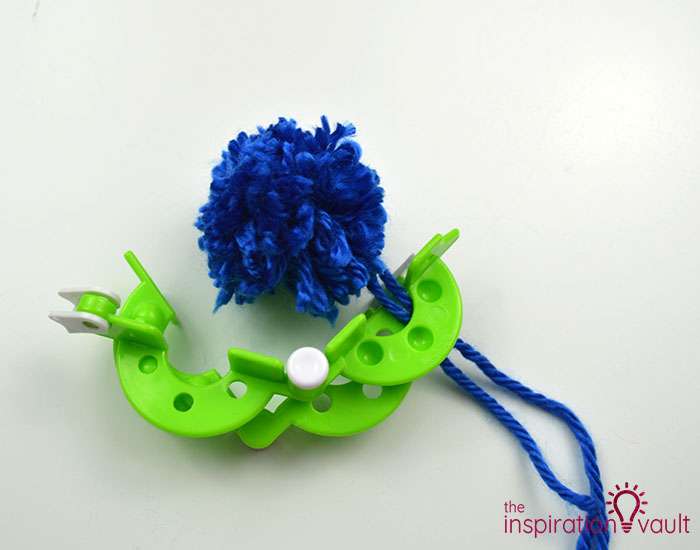 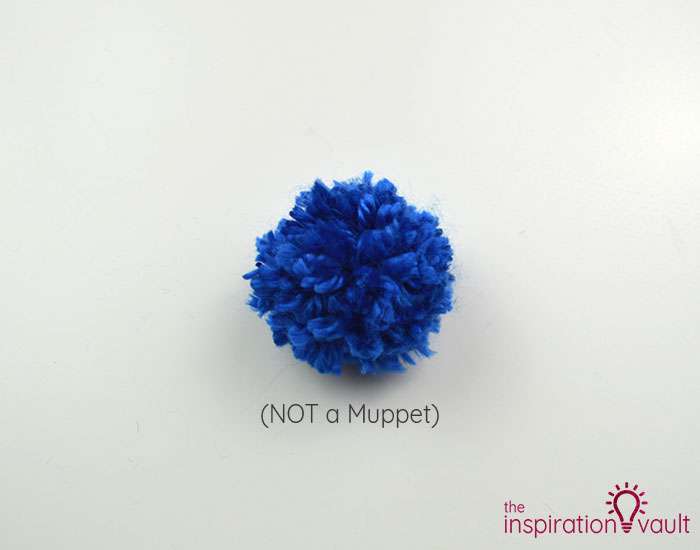 8: Repeat the process for as many pom poms as you need for your letter. I made 10 small and three bigger ones for mine. I made them in two different sizes to vary up the texture, but you don’t have to. 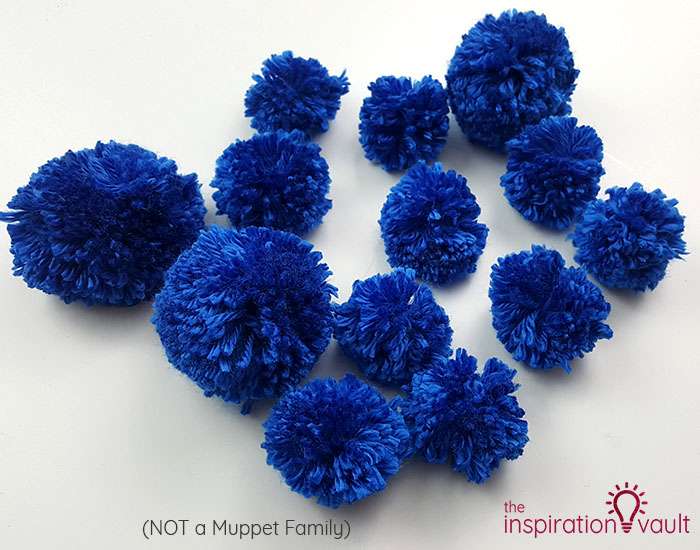 9: Figure out where you’ll need to place them on your letter and then hot glue them onto the letter. I helped form my pom poms into sort of half poms so they’d stick better and flatter, focusing the glue mostly on the center. 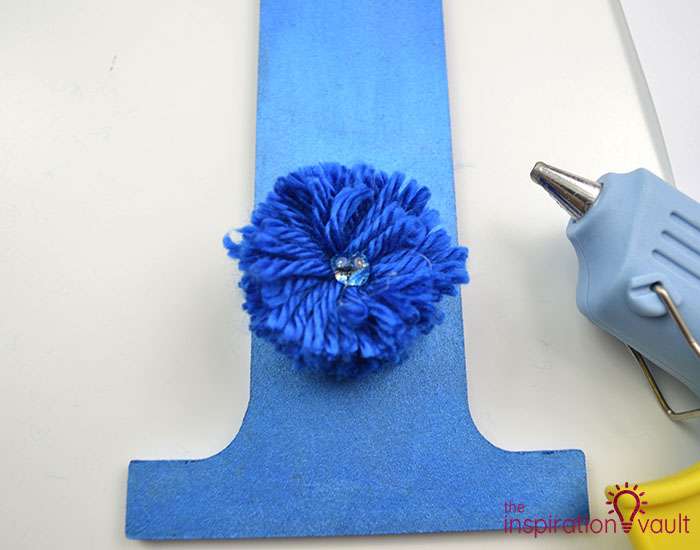 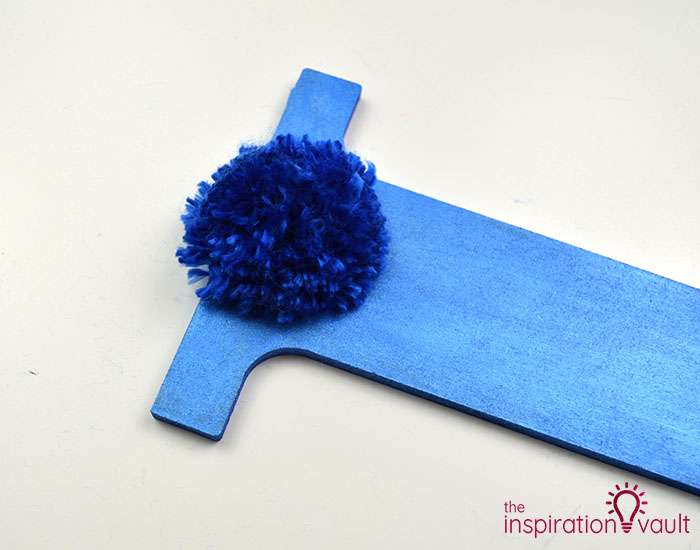 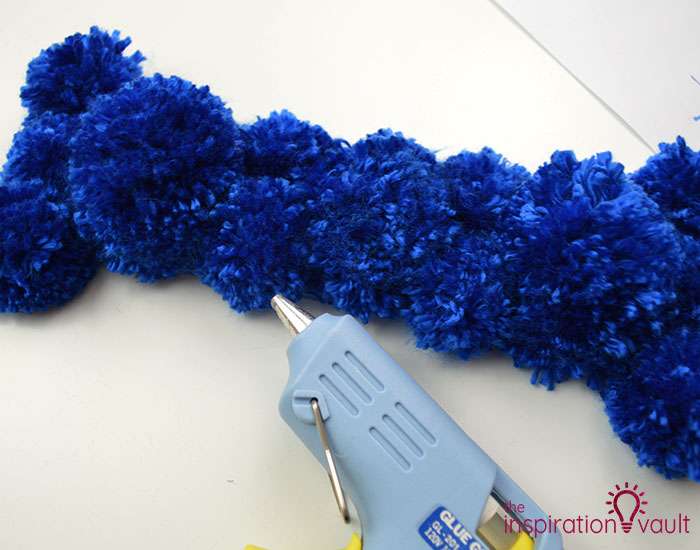 That’s it! I was able to make this Simple & Fun Pom Pom Monogram Letter, from start to finish, in about an hour. This is one of those awesomely universal crafts that can be easily changed to suit your style or decorating preferences. It would look adorable with bright, variegated yarn, for instance. Those pom pom makers really make a huge difference, too, when you’re making a whole bunch of them. Now I want to make a whole pom pom rug! How about you? Do you like to make pom poms for crafts? 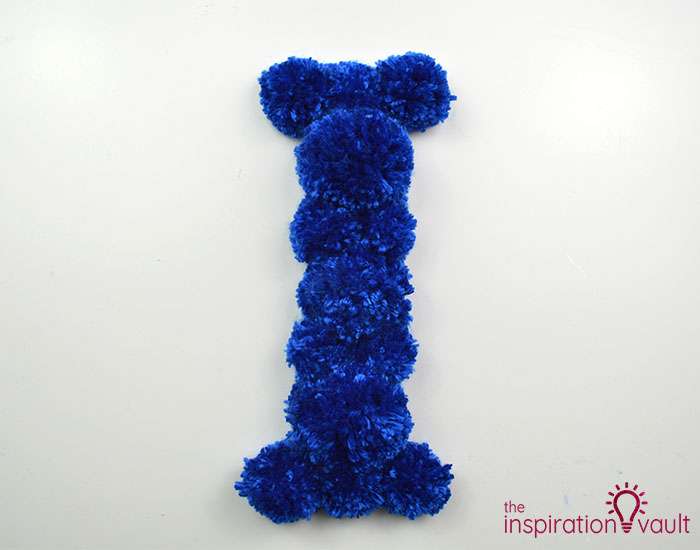 This Pom Pom Monogram Letter is #5 in part of a 10 letter series. In the end, they will all spell out “Be Inspired” so I only have five more to go. So far, in addition to the chalk painted one mentioned above, I have the Paper Rose Filled Monogram Letter, the String Art Monogram Letter, and the Ribbon Covered Monogram Letter. I also have another yellow one coming soon! 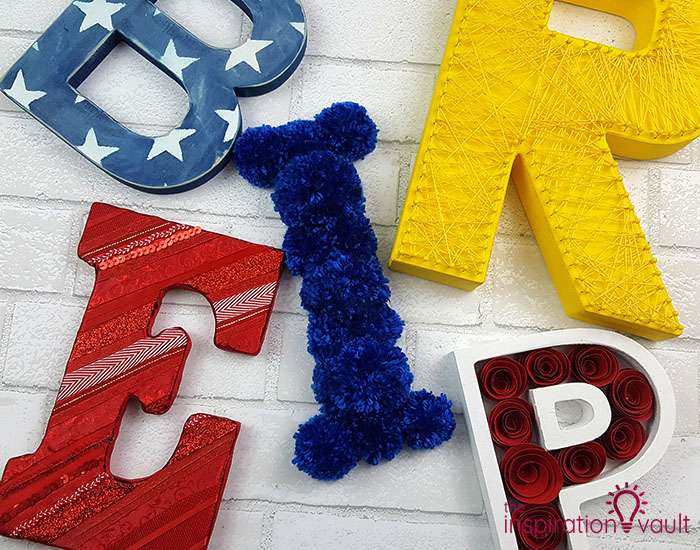 Now let’s see what other lovely BLUE projects our crafty friends have come up with this month! 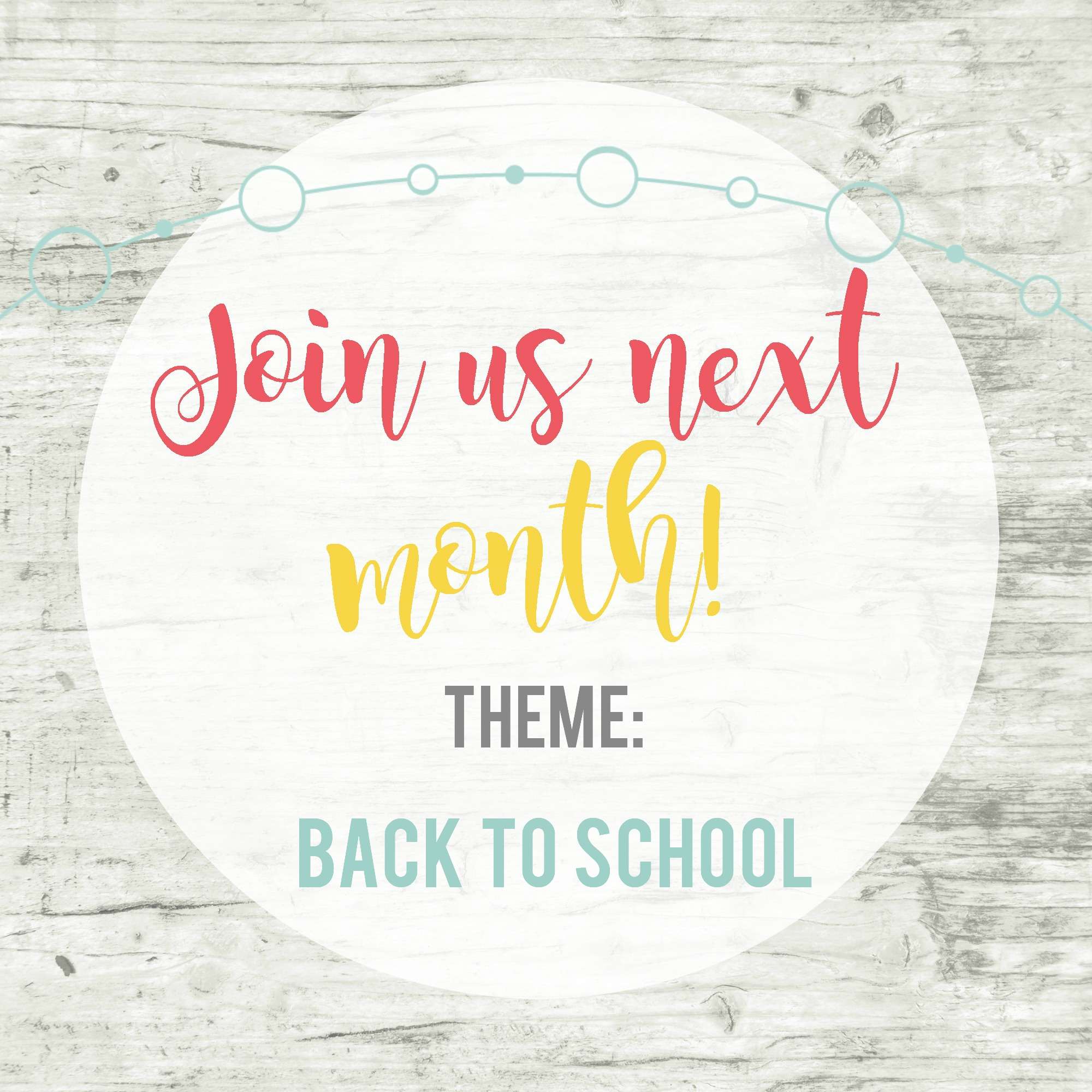 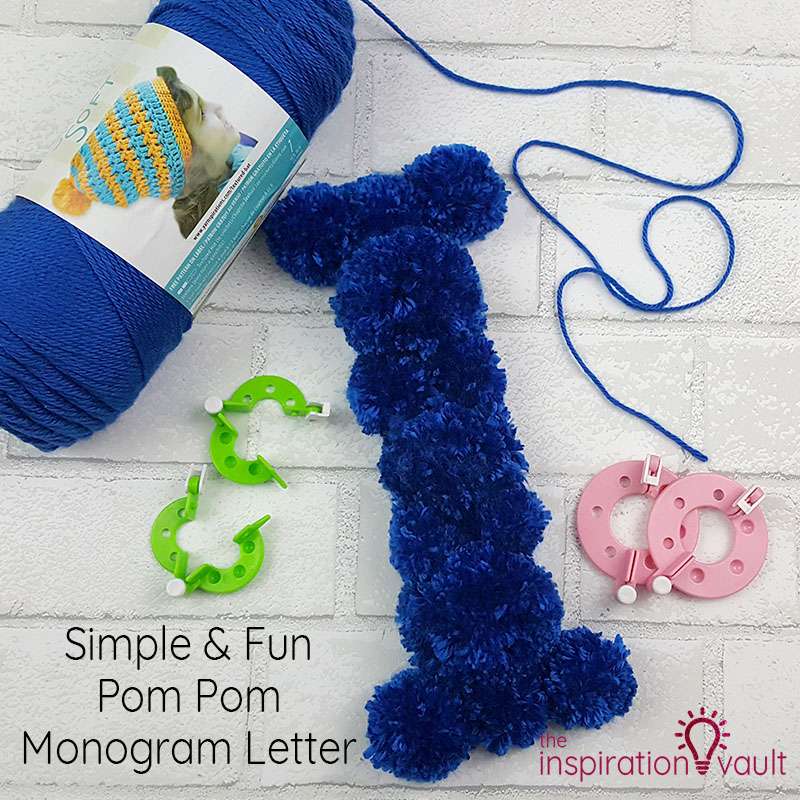