One of my son’s obsessions is Batman, so he insisted on a Batman Party for his 8th birthday. That was fine with me! I knew there were loads of ideas to try. He was very involved in the planning process and sat on Pinterest, pinning ideas he wanted to use. Since I’m not a celebrity who throws $20,000 kid’s birthday parties, I worked with him to select elements, food, and decorations that we could afford, we could reasonably make, and have time to finish.

While I would have loved to  make every aspect of this party by hand, my busy schedule dictated otherwise. Instead, I went with my favorite way, the real-world regular mom way, I made some things and I bought some things. As I’ve mentioned before, all that matters is that the kids have fun, which they did. Mission accomplished! 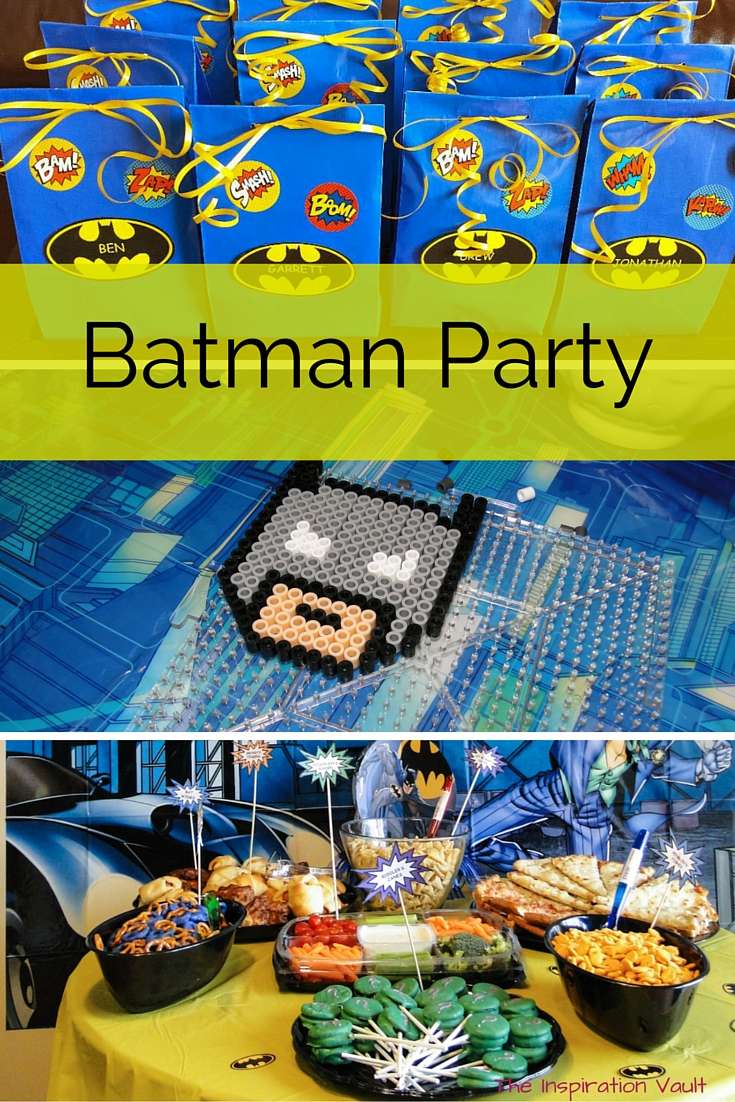 Every party starts with the invitations. We went with the Amazon Batman invites. Yes, I know I could have made custom ones, but time dictated speed over impressing a couple of moms. Trust me, all the kids care about is if they can go, and most parents just want the details. These turned out to be really cool anyway. They came with nice, blue envelopes, “save the date” stickers for calendars, and Bat Symbol stickers to seal the envelopes. I also liked their postcard style that made them easy to clip to the fridge. 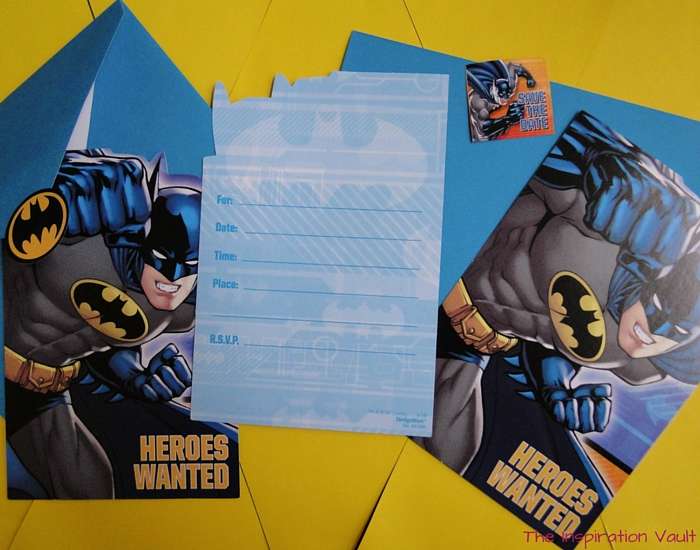 As you can see, there was no mistaking the Batman Party theme here! 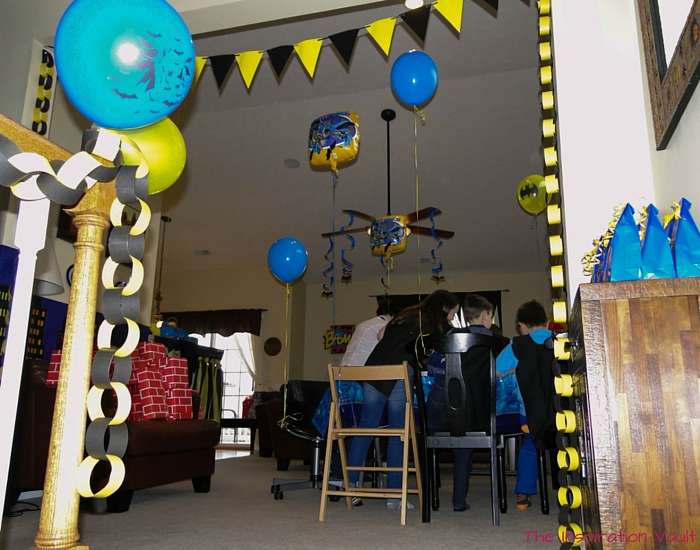 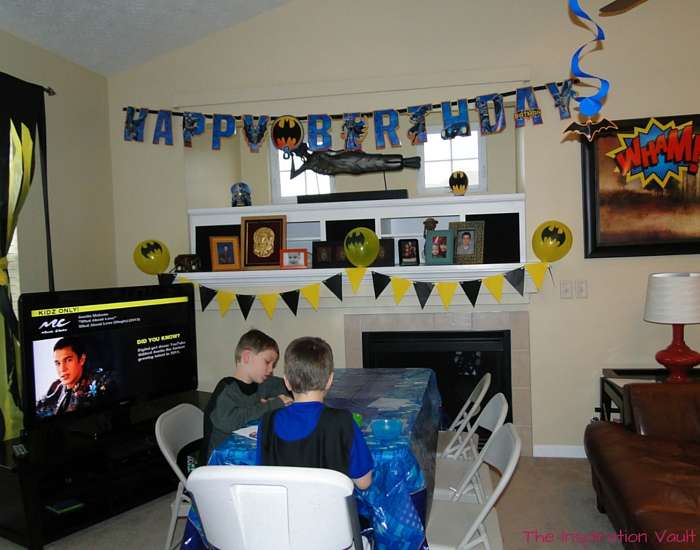 While the overall theme was Batman, I used yellow and black decorations for accents and general comic book superhero elements to make it more fun.I bought Pennant Banners and Chain Link Garland in yellow and black from Party City. Then I just linked them all together in alternating colors. You can use this same effect with just about any color scheme or theme. If they don’t have the colors you need, they are pretty easy to make yourself. Hmmm, maybe I’ll make a tutorial on those later. 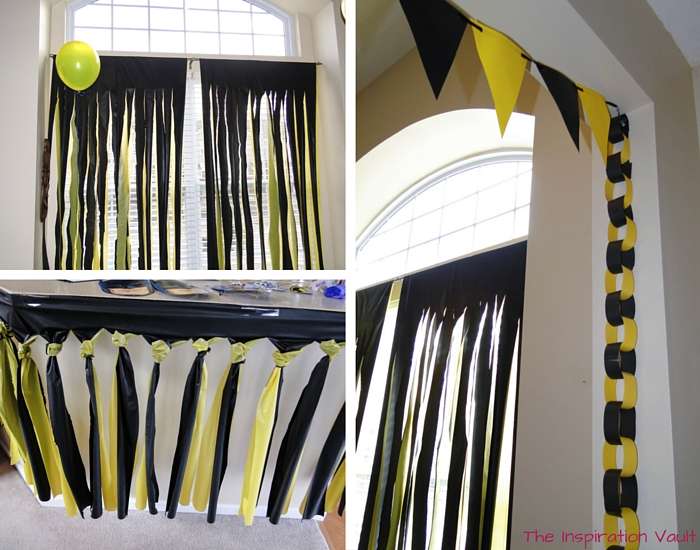 The Cardboard Jumbo Superhero Word Cutouts that say cool things like “Wham!” and the Cityscape Backdrop you see lining some of the walls and the Batman Scene Setter were purchased from Amazon as well as the Batman Party packaged decorations.

One of the decoration elements I was sorely disappointed in was the whole plastic table covers used as backdrops. You can see the original inspiration from this pin. The problem was that the reality of cutting all of those strips perfectly straight proved to be impossible for me. If you have personally succeeded in this, please post pics and explain how you did it. This idea was definitely a Pinterest “fail” for me. That plastic is slippery and slid everywhere even though both layers were pinned together. I’d like to say my cat sliced some of them for me with her claws–it certainly looks like it!

I couldn’t resist naming all the food, well, most of the food, after Batman Villains. We had:

Oh, and we had pizza, but I couldn’t think of a villain to name it after. We’ll just say Alfred ordered some pizza. 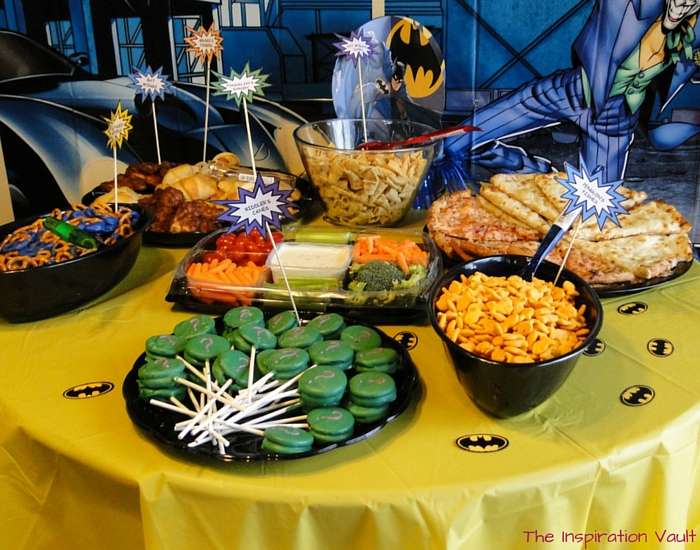 The kids loved most of the food. The veggie platter stayed pretty intact and no one really cared for the Bugles. I think they taste like a cross between Fritos and Chex. In retrospect, I shouldn’t have served Kool-Aid to a bunch of 7 and 8-year-olds, but boy did they LOVE it. I don’t know if many kids get to drink Kool-Aid anymore, so one night won’t ruin them, and besides, there aren’t many other green drink choices. 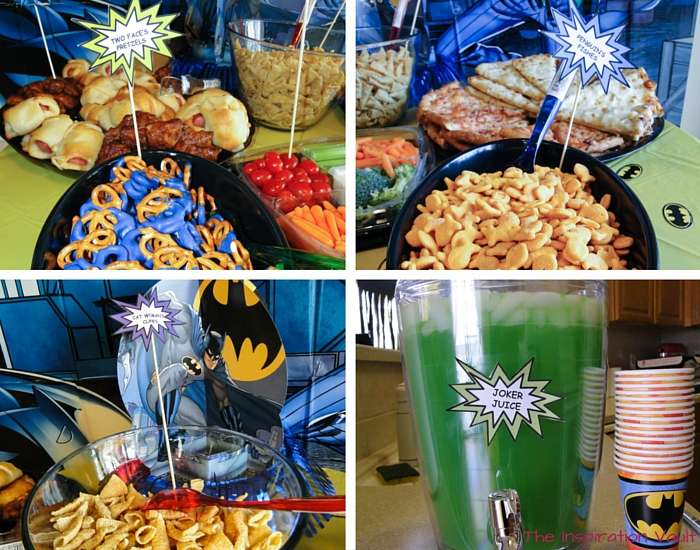 I special-ordered a custom cake from a local bakery I’ve used often. Their cakes are super delicious and normally exactly what I requested. This time around, though, I focused on how great it tasted and honestly not one child commented on the color of the frosting, so it really wasn’t a huge deal. Bottom line, though, I doubt I could make a cake like this myself. I know Aleisha could! 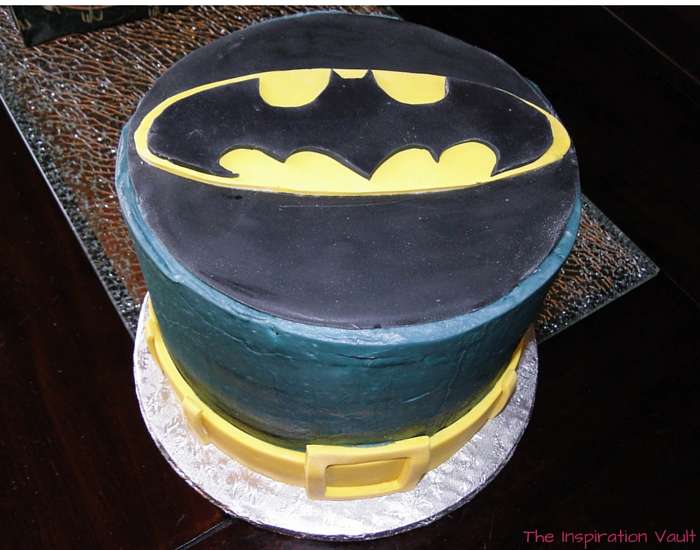 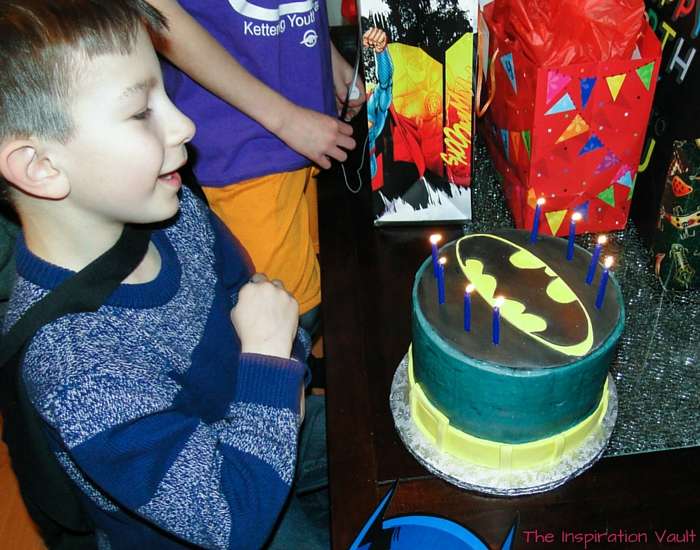 My son informed me that every birthday party HAS to have the Donkey Game. I didn’t know exactly what he meant so he said “ya know, where you pin the whatever on the whatever.” He is such an eloquent young man, but he’s right, kids love to pin (stick) whatevers on whatevers. I briefly entertained the idea of cutting out a Batman silhouette from black poster board, but I ran out of time. Instead, we just bought the Batman Party Game from Amazon and printed out some extra Batman symbols since the kit only comes with eight. Here’s a PDF with those Bat Symbols you can print on yellow paper and cut out. Batman Symbol Sheet 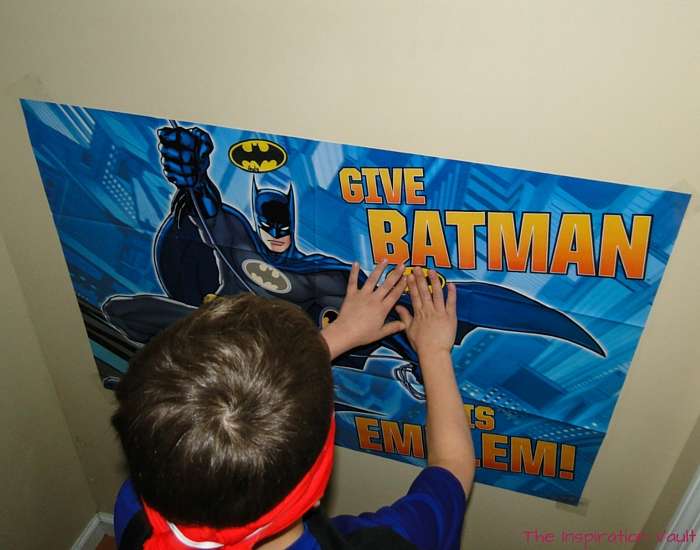 I found this game idea on Kara’s Party Ideas through Pinterest. I used her idea for inspiration and came up with some simple rules. I divided the kids into teams of two and gave each team a different colored roll of crepe paper streamers. The teams each took turns wrapping the villain (my barely willing 13-year-old son) with as much streamer as they could in one minute and then he would try to bust loose. After each team had a turn, they had a “mega wrap” and they all wrapped him with the remaining streamers. He was still able to bust loose every time, but the kids had great fun “tying” him up anyway.

What superhero doesn’t like kicking!? I was originally inspired by Happy and Metacarpus through Pinterest. The concept is quite simple: stack some boxes and the kids will kick them down, over and over and over again. My sons were still stacking and kicking them down two weeks after the party. In fact, we kept them around for a while. For our boxes, I wanted them to look like a brick wall, so I wrapped them with brick print bulletin board paper. I purchased mine at a local teacher supply store for $9 per roll (x2), but you can find them on Amazon, too.

Tip: Use clear packing tape when wrapping these. The paper’s thickness and all the kicking will be too much for regular gift wrap tape. 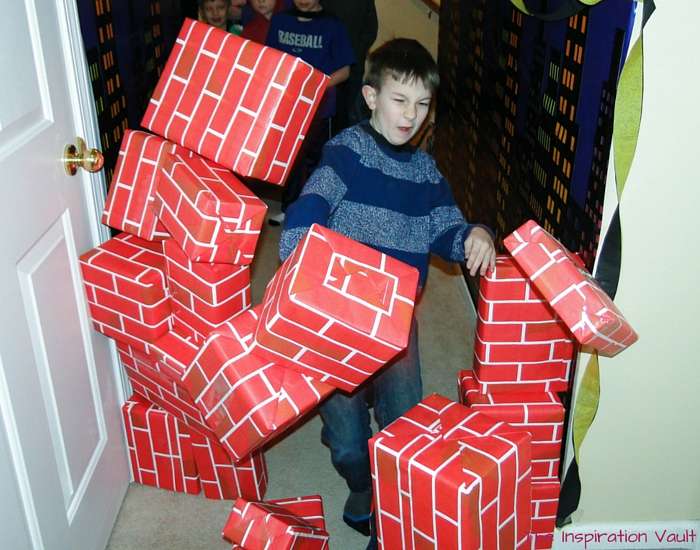 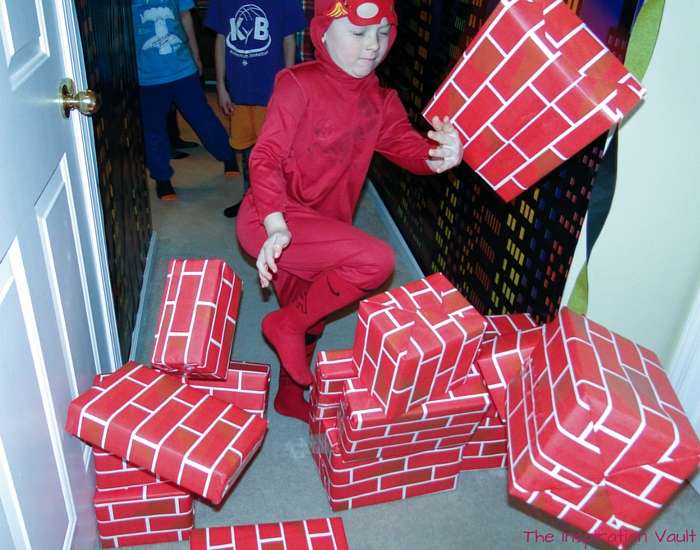 Let me tell you how much I despise piňatas. They are made of reinforced cardboard that is nearly impossible to break or they have the anti-climatic pull strings. When I was browsing superhero party ideas, however, I came across a rough idea for a “punch wall.” There were only a couple of photos, and of course zero instructions on how to make one. So, I reverse engineered one and voila, superhero brick punch wall. I put superhero stickers from Oriental Trading on little yellow bags for each guest to collect their candy. 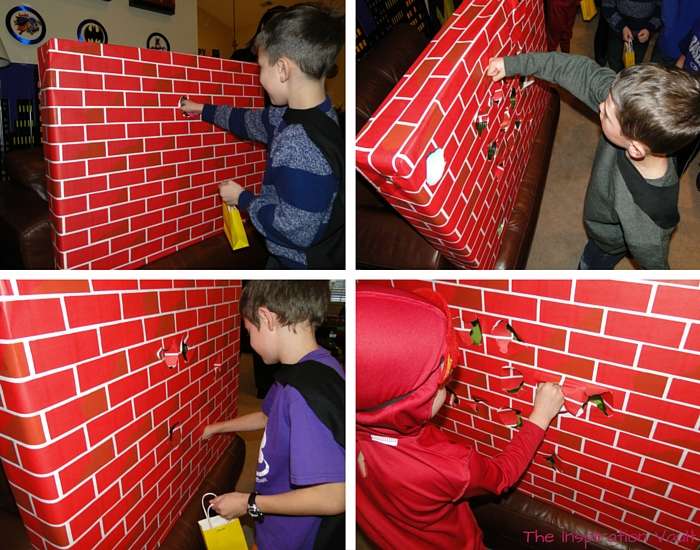 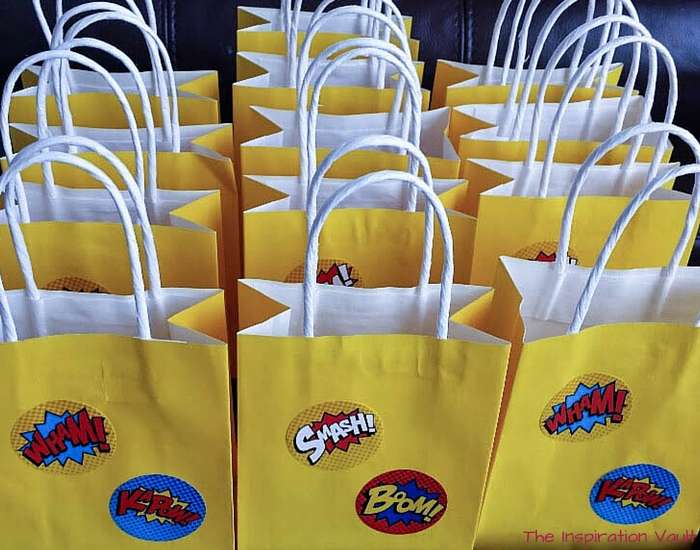 I know not everyone wants to deal with a bunch of kids making a craft during a party, but let me tell you, if it’s the right craft, they will love it and it’s a great way to get them to settle down. I decided to make Perler Bead Batmans. I was all set, I had all the right colored beads, the plastic bases, and what I thought was an awesome pattern. I found it on Pinterest and it said something about Perler in the comments. Well, when I made one ahead of time to see what it’d look like, I was shocked when just his head took up 3 inches. It turns out the pattern was for a friendship bracelet and someone guessed it would be great for Perlers. I won’t even put that pattern on here. Instead, here’s the Batman head we made. 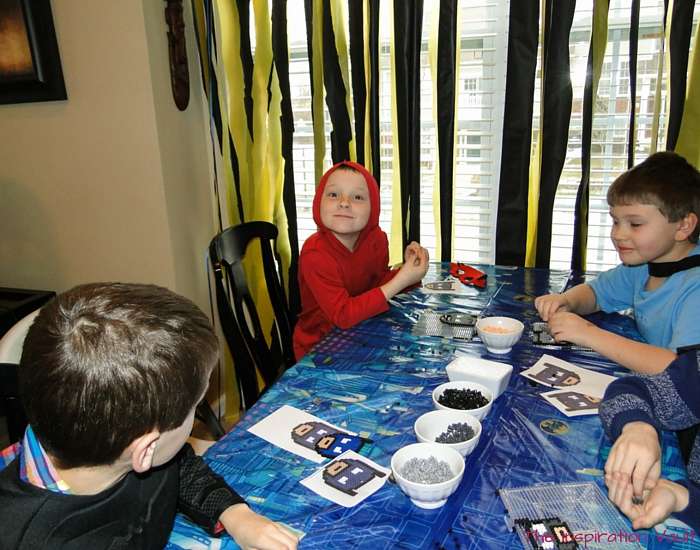 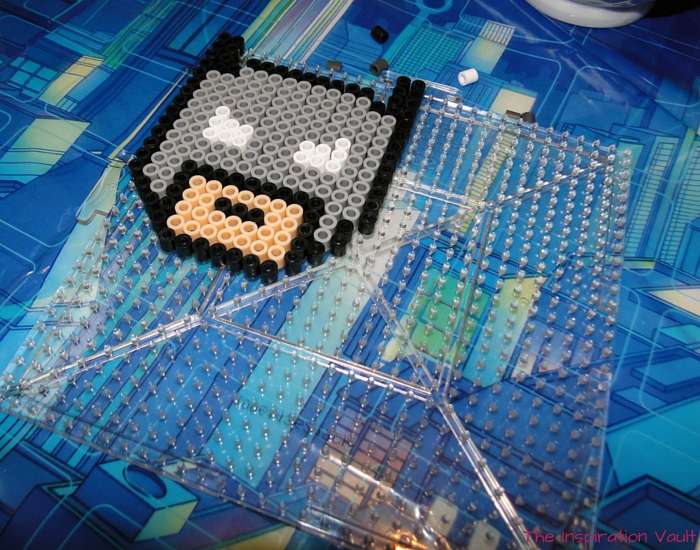 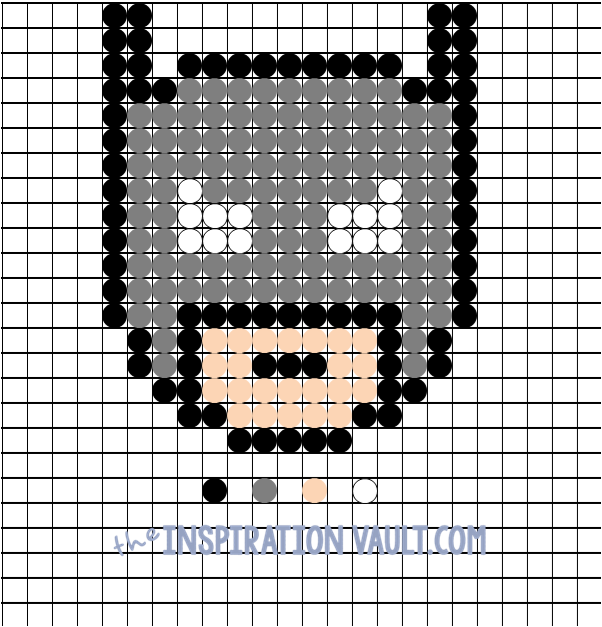 My son saw a Batman Comic Book Photo Prop on Pinterest here and begged me to make one for his party. He wanted a different comic book cover though, so we found one to his liking. I may be crafty, but I am certainly not artistic. Thankfully, my very artistic daughter was still home on break and agreed to sketch out the cover for me. After she drew it and outlined it in black, I filled it in with paint. She was kind enough to put a dab of each color needed in the correct space, so I didn’t mess it up. Check out our full Batman Comic Book Photo Prop tutorial if you’d like to see step-by-step instructions. We also used these as Thank You notes by getting them printed at Walgreens using their mobile app. It was super convenient to use since I took all the pics with my smartphone.

Okay, yes, I could have handmade every single treat in the bags, but my son insisted his friends wanted “real” Batman stuff. Amazon was my friend once again because they have whole sets of Batman items are cost effective. I also grabbed some yellow and blue candy by the color as well as some green “kryptonite” rock candy. (Batman always carries some in case Superman gets out of line.) 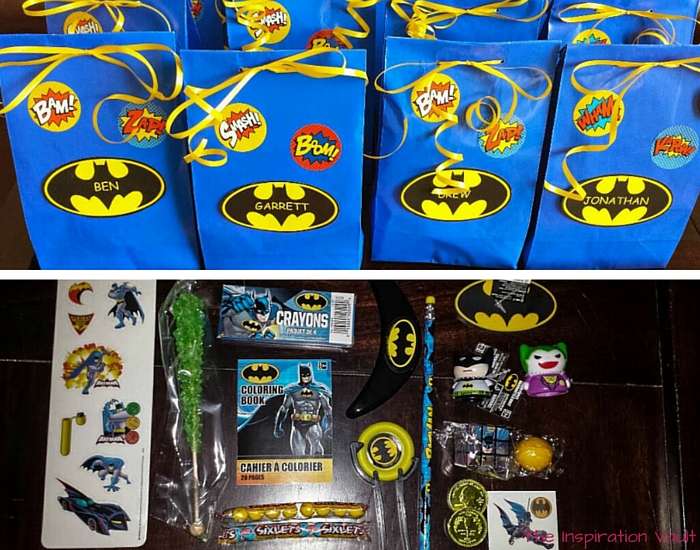 If you’d like to make the Batman name labels I used on the bags, here’s the MS PowerPoint file. I used Comic Sans font, which for once is actually appropriate. Just delete and replace the existing names. Though, I’d be willing to bet a lot of the names would be similar! Bat Symbol Name Labels

Each guest got their very own black Batman cape. I made these no-sew capes out of black knit fabric and simply cut them out. I didn’t use a pattern to cut them, but followed a general shape. I made an easy-to-follow 5 Minute No Sew Capes/ Cloaks tutorial where you can see how easy they are to make. The kids loved them and they can be made in any color you choose. I decided to not iron on the Batman symbol in case they wanted to be a different hero, but that process is very easy to do, just remember to get the iron on printer paper for dark fabrics. These are so fast to make, I was making them in the last few minutes before the guests arrived! Where are my fellow procrastinating peeps at?

All in all, this Batman Party turned out to be super simple and fun. It was a nice change to only have 10 guests instead of the usual 20+, which can be a real handful when it comes to party planning, not to mention cost.

If you’re looking for great deals on goodies for the punch wall or favor bags or even party decorations,  Oriental Trading is another great option and they have great prices.

For even more ideas, visit our Superhero Party Inspiration board on Pinterest!